In search of relatives of ‘Watler’…

Two of the first settlers of the Caribbean paradise were a Welshman called ‘Walter’ and a Cornishman called ‘Bawden’ – both said to have been members of Cromwell’s forces in the West Indies. It is believed that their names were subsequently morphed into ‘Watler’ and ‘Bodden’, which to this day are prevalent family names on the Islands. The search for relatives of Caymans’ first settlers is part of a campaign to raise the awareness knowledge and understanding of the 360-year relationship that exists between the Cayman Islands, Cornwall and Wales specifically, and Britain as a whole. This week the Cayman Islands Representative to the UK, Eric Bush visited Cardiff with a team from the Cayman Islands Government Office to make further connections and meet with various key stakeholders in the campaign, as well as to meet media and share the story of Cayman across Wales. An exchange of signed Cayman Islands and Welsh rugby shirts took place at the iconic Principality Stadium to mark the occasion.

Commenting on the Cayman Welsh connection, Mr. Bush said: “Just like the Welsh, we are immensely proud of our national identity, culture and history. Cayman has a rich and diverse population today – but it all began with these original settlers, including a Welshman called ‘Walter’, ‘Walters’ or ‘Watler’. “Our research shows that Walters is a commonly found name in Wales with notable concentrations in around Glamorgan, Monmouthshire and Pembrokeshire – it can be traced back more than 500 years. Our search for Walters is not just about reuniting long-lost relatives, it’s also a way of building closer links to Wales for the future. We have a great story to tell and we want to use this to educate more people about Cayman Islands, our history, where we have come from and our national identity. It will allow us to connect to new audiences whilst instilling a greater sense of national pride at home.”

“The journey to Wales was a perfect start to our campaign, with the enthusiasm and help from a partnership with Global Welsh (a global diaspora group for Wales) and key connections with the Glamorgan Archives we feel we have made a great start in getting our message out to Wales.”

He further commented, “we have had a great take up from Welsh media, with articles shared by BBC Wales, Wales Online, a segment on BBC Radio Wales, a feature on ITV Wales at Six, and partnership shares from Global Welsh, Fabulous Welshcakes, The Principality Stadium and The Welsh Rugby Union, and of course many shares and comments though social media. We have launched a social media video campaign as well as collecting information on our CIGOUK website. This will be a great start to this initiative and I am very excited to see where it takes us.” As part of the campaign Welsh ‘Walters’ are being offered the opportunity of a once in a lifetime trip to the Cayman Islands. Welsh men and women with the surname Walter or Walters are being encouraged to trace back their family history to find a connection which will be verified by the Cayman Islands Government in the UK. Walters who believe there is a link should visit www.cigouk.ky/wales for more information on how to enter, to visit the Cayman Islands Government Office Facebook page, and to post across social media with the hashtag #IamCayman 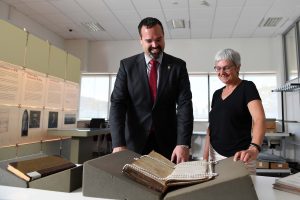 – Ends –
For further information contact:
Kate Kandiah, Angel Oversees
Tel: +44 (0)7861 597 795
E: kate@angeloversees.com
For information on the Campaign and how to enter visit: https://www.cigouk.ky/wales