Royal Visit to the Cayman Islands

On the last day of their tour through the Caribbean, the Prince of Wales and the Duchess of Cornwall spent the day in the Cayman Islands.

Prince Charles’s day began on the island of Cayman Brac – 145 kilometres northeast of Grand Cayman – at the Cayman Brac Swimming Pool, where he officially opened it and attended a reception with the Governor and the Premier of the Cayman Islands.

The Cayman Brac pool is a new facility, per Clarence House, and will be shared by the local schools and the public for training, competitions, and regular swimming hours. After opening the facility, Prince Charles met with members of the community who’d come to see him.

Following the pool opening, the Prince visited Little Cayman to attend an engagement with children at the Cayman International School on marine conservation. 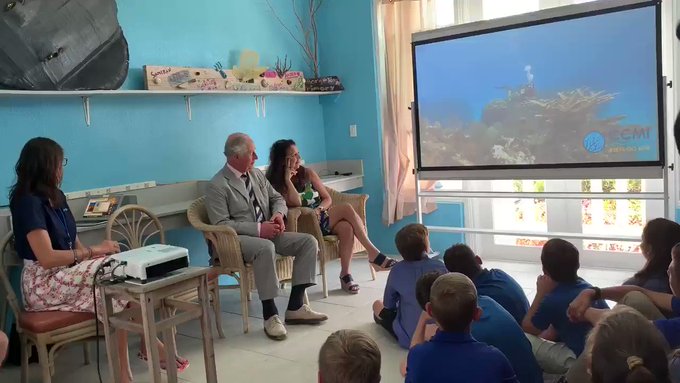 The Prince of Wales visits Little Cayman where he joined a class of Year 6 pupils from Cayman International School for ‘Reefs Go Live’ – a live link-up to a dive team on the nearby reef. #RoyalVisitCaymTwitter

At the school, Prince Charles joined a Year 6 classroom discussion called ‘Reefs Go Live’ where they watched a live link to divers at a reef; and he was able to talk with students on Grand Cayman Island, Cayman Brac Island, and in Bermuda who were watching through an internet video chat.

The Central Caribbean Marine Institute tweeted after his visit that it was “a privilege to share the work we do at CCMI with Prince Charles today. Our key takeaway – we can save coral reefs if we act now!”

His Royal Highness then travelled to the Clifton Hunter School to meet with its Head Boy, Head Girl, and Principal before heading to the Queen Elizabeth II Royal Botanic Park to attend a roundtable discussion on sustainability.

At the Botanic Park, Prince Charles met with its manager to learn more about its future goals to engage children through the Children’s Centre before cutting a ribbon and unveiling a plaque to commemorate his visit.

The Prince also met with local business owners to discuss environmental projects and how the finance sector can help with their goals before heading to the Blue Iguana Recovery Centre to see how the workers take care of animals and to meet the eponymous blue iguana, Peter.

Prince Charles’s next engagement involved meeting hurricane relief workers, including Stephen Fitzgerald, the Unit Executive Officer of the Air Operations Unit, and his team who provided hurricane relief to Turks and Caicos following Hurricanes Irma and Maria two years ago.

Prince Charles also met with Inspector Andre Tahal, the leader of the Cayman Islands Police Service who arrived in the British Virgin Islands after Hurricane Irma.

Meanwhile, the Duchess of Cornwall’s first event of the day was a visit Jasmine Villa Hospice with the Governor’s wife, Lissie Roper.

Before touring the facilities, Camilla unveiled a plaque and cut a ribbon to mark her visit. Once inside, she was shown the art in the central hall of the Jasmine Villa Hospice.

A few days before the Duchess’s visit, Felicia McLean, the Hospice’s Director of Operations and Nursing told CNS Local Life that “having Her Royal Highness, the Duchess of Cornwall, open Jasmine Villa is an honour.

“This facility is the first of its kind in the Cayman Islands and having it opened by [Camilla] is the icing on the cake. She will see firsthand what our community can do when it comes together for a good cause.”

According to Clarence House, the Jasmine Villa Hospice is a “not-for-profit organisation dedicated to providing professional, dignified and compassionate care, free of charge, to anyone in the Cayman Islands living with debilitating long-term or end-stage conditions,” and relies entirely on donations.

Camilla then paid a visit to The Cayman Islands Crisis Centre to learn about the work of the Teens and Young Adults Lounge, and to meet with teenagers who use the Lounge and how it helped them.

During her visit, Her Royal Highness also watched a musical performance and enjoyed a slice of birthday cake to mark the Lounge’s second anniversary.

Following her visit to the Crisis Centre, travelled to Georgetown Primary School where she watched a choir performance, met with staff members, and listened to a poetry recital from several students.

Camilla was joined by the Cayman Islands’ Minister of Education for this visit.

For their final engagement in the Cayman Islands, yesterday evening Prince Charles and the Duchess of Cornwall attended a reception and cultural celebration at Pedro St. James.

Guests included the Governor, the Premier, Members of the Legislative Assembly, crafters, and members of the public. The Governor and Premier each gave short speeches after Prince Charles had inspected the Guard of Honour.

Prince Charles then presided over the Investiture Ceremony for Franz Manderson, the Deputy Governor of the Cayman Islands, who was recognised in The Queen’s Birthday Honours last year.

The Prince also gave a short speech in which he thanked the people of the Cayman Islands for their hospitality.

“We are deeply grateful to have been given such a special welcome on all three islands and to have met so many people from such diverse backgrounds who now call these islands home,” he said, per the Cayman Compass.

“As we leave you this evening, we will take with us the fondest memories of these beautiful islands and the warmth of the Cayman Islands people.”